What Is A Reference Angle?

In the context of geometry:

Just consider we are willing to draw a positive angle that is exactly \(329^\text{o}\). What we will do is to start from the right side of the x-axis which indicates a three o’ clock on the clock. Now we will rotate in the upward direction in the anticlockwise direction. We will keep on moving till we cross the negative y-axis(\(270^\text{o}\)) and reach the angle. After we do so, we will draw a terminal reay from the origin to the angle we have just formed. At this point, we have two angles that are formed by selecting the positive side of the x-axis. One of them is \(329^\text{o}\) and the other one is \(31^\text{o}\). This second angle is the reference angle. Our free terminal point calculator solves for the terminal side angle in a fragment of seconds by saving your precious time.

There arise two cases which are as follows:

Below are the formulas to find reference angle in degrees:

All of the above mentioned reference angle formulas are summarized in the following pictorial representation: 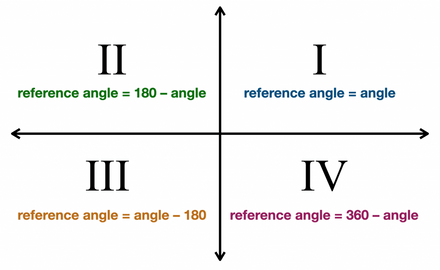 How To Find Reference Angle?

In this section, we will focus on clarifying your concept more precisely by resolving a couple of examples. Just stay focused!

Which is our required answer.

How to find reference angle in radians corresponding to \(43^\text{o}\)?

First, we will convert the given angle in radians:

As the given a le lies in the second quadrant, using reference angle formula:

Here our free reference angle calculator radians also determine the same angle but more precisely so as to avoid any error in the calculations.

What is the basic purpose of the reference angle?

By using a reference angle, you can make your trigonometric calculations much easier with smaller angles involved in the computations.

How do you convert an angle in radians to degrees?

You can simply make use of the following formula to calculate angle in degrees if it is given in radians:

Is the reference angle always positive?

A reference angle is always positive and is less than \(90^\text{o}\). This is why it is called an acute angle as well.

Reference angles make it possible for you to determine the trigonometric angles that lie outside the first quadrant. Also, you can use these particular angles to find the coordinates of the angles. That is why the free online reference angle calculator provides you with the facility to find reference angles accurately.

Area of a Semicircle Calculator