The online free Coulomb’s Law Calculator provides the step by step solution to calculate the force of attraction or repulsion between two charges, their electric charge, according to the distance between the charges.

The Coulomb Law calculates the electrostatic force acting between two charges. The force is always acting along the straight line that join the two charges (q₁q₂) and the force act along the square of the shortest distance (r²) between the charges:

The Coulomb’s law Formula is as follows:

r= The shortest distance between the charges in Meters(m)

The values of the “ke” have been inserted into the Coulomb’s law calculator, and you have no need to remember the accurate value of the “ke”. The electrostatic force calculator automatically finds the value of the coulomb’s constant value.

The unit of electric charge:

The SI unit of the electric charge is Coulombs(denoted by C).

“1 Coulomb is a charge that is transported by the constant current of 1 Ampere during 1 Second”.

How to calculate coulombs?

Where Ampere is the unit of the current and we can measure the current or  Ampere by the Ohm’s calculator.

Historical perspective of the Coulomb’s Law: 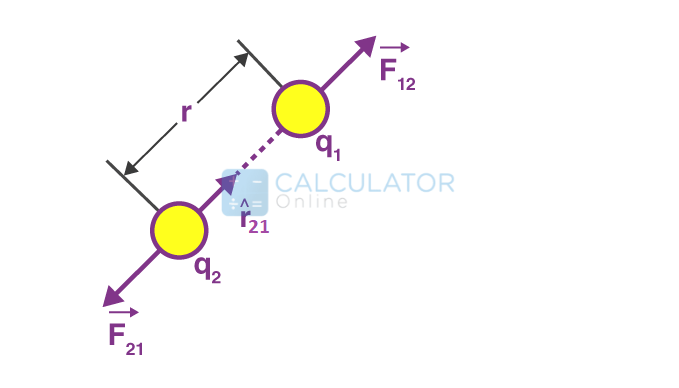 We can represent both the forces by:

The electrostatic force formula for two charges is as follows:

The resultant force due to number of point charges can be represented as:

By implementing this above calculation,it is possible to implement electrostatic force formula on the number of point charges.

The limitations of the Coulomb’s Law:

There are certain limitations of the  Coulomb’s Law:

Working of the Coulomb’s Law Calculator:

The Force of attraction or repulsion  between two charges can be measured by the Coulombs law calculator:

The coulomb’s law calculator do the following calculations:

Why do charges repel each other?

What is the SI unit of electrostatic force?

What is meant by esu and emu?

The “esu” denotes the “electrostatic unit” and it is also represented as prefix “stat”and read as statcoulomb. The emu denotes electromagnetic unit and is also given the prefix “ab” known as abcoulomb.

What is a common example of the  electrostatic force?

The common example of the electrostatic force is when you run a comb in our dry hairs and attract the pieces of papers by it.

What does “Q” represent in the electric field?

The coulomb’s law formula has great application in modern day life from the Xerox machines to the Laser printer, it is also utilized for the powder coating. In these machines charged particles are used in the printing process. The coulomb’s law calculator is used to find the force of attraction or repulsion between two objects in installing them in various machines.

From the source of Wikipedia: Coulomb, Definition

Constant of Proportionality Calculator
Search a Unit to Convert