This inequality calculator solves linear and quadratic inequalities in a smooth way. Solving inequalities has now become just too simple when all the steps are represented in detail. The step-by-step calculation of the inequalities makes it easy for the students to capture the whole concept of inequality.

The graphical representation of the inequality, whether it is linear or quadratic is also elaborated by the graphing inequalities calculator. The corresponding graph of inequality makes it possible for the students to find the limit of the inequality.

Let’s discuss the procedure of resolving inequalities and how you can simplify them by using this free calculator.

Operators Used in the Inequality:

The inequality values can be represented by the four of the following operators. It is easy to understand the ” >”  Greater than and  “<” Less than. But when we are having >= Greater than equal or <= Less than and equal, then it becomes difficult to understand. It means there are some values where equal values come and at other points, we are getting less than or greater than values.

This can be understood by the following example:

This can be understood by the example:

This can be understood by the example:

This can be understood by the example

The inequality solver has no effect:

The inequality solver has no effect:

The inequality is represented as:

When Inverting each no zero side of an inequality changes, then  the direction of the inequality:

We are solving and graphing inequalities of a single variable and double variable graphs of the linear equation in the cartesian coordinates.

The graphing of the linear inequality for single variables like 2x+3>5 is a straight line and it is represented by the number line. It is convenient to use an inequality graph calculator to represent that the 2x+3>5  horizontal line graph starts from 1 and extends to the infinite level on the number line.

calculate to represent that the 2x+3>5  horizontal line graph starts from 1 and extends to the infinite level on the number line.

The graphing of the linear inequality for double  variables like 2x+62y is a curved line in the cartesian coordinate . It is convenient for the students to use  graphing linear inequalities calculator to represent that the “x y-3”  or “y x+3”. The graph of the Double Variable Inequality is shown as below: 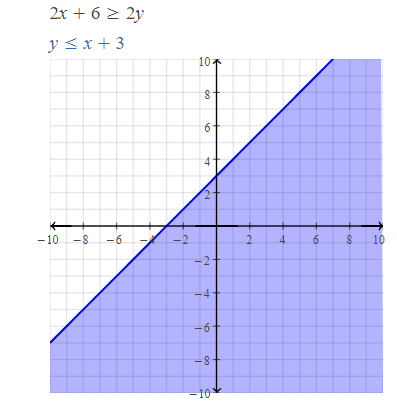 How to solve Linear Inequality?

How to solve a quadratic Inequality:

When we are putting the x2+6x+9>0 in the compound inequalities calculator, we find the roots x>-3 and  x<3. Both the roots are real in its nature, and when solving and graphing inequalities of the quadratic equation x2+6x+9>0.  The straight line is represented as the graphs lies between values of -3 >x<-3.

Solving inequalities by the compound calculator is simple and we have arranged a guide for you people to operate it:

The free calculator does the following calculations:

What are the different types of inequalities in math?

An inequality is a mathematical relationship between two expressions and is represented using one of the following:

What is a compound inequality?

What is a polynomial inequality and how are they represented ?

What is the inequality number line?

An inequality number line is a graphical representation of the inequality result when its answer is a real number.

What are the interval notations?

Interval notation expresses the location range of an inequality by using brackets for ≥ and ≤ signs and parentheses for < and > signs. Like we can represent it by -4≤ x<2. Here x lies between interval -4 and 2. The x is greater than or equal to -4 and less than 2. Here you can determine the interval notation as well by subjecting to our other interval notation calculator.

The basic use of the inequalities to compare the relative range of values. They can be used to compare the integers, variables, linear and quadratic algebraic  expressions. And to speed up the calculations, you can let this free inequality calculator do that for you in moments.

From the source of Wikipedia: Properties on the number line, Chained notation, Inequalities between means

From the source of bbc.co.uk/bitesze : inequalities , theorem