An online tangent plane calculator will help you efficiently determine the tangent plane at a given point on a curve. Moreover, it can accurately handle both 2 and 3 variable mathematical functions and provides a step-by-step solution. Being able to calculate a tangent plane quickly using this calculator without going through all the steps of differential calculus is a huge time saver.

Additionally, you will also get its theoretical background and will find some solved examples as a bonus.

What is Tangent Plane? 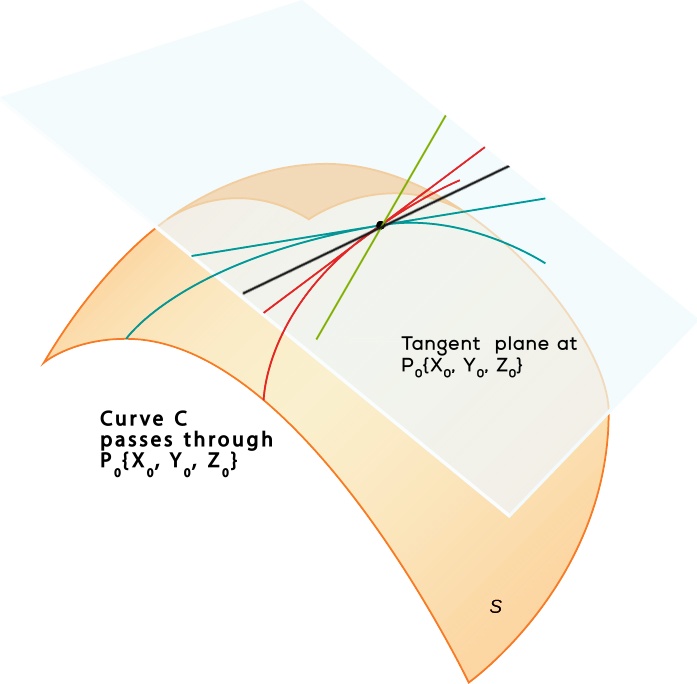 The function forming the surface should be differentiable at a point so that this plane may exist there.

How to Find a Tangent Plane Equation?

You need to follow the forthcoming steps for finding the equation of a tangent plane on a surface given by a function. This tangent plane calculator also gives a similar solution in a fraction of the time.

Make sure that you have a mathematical function of the surface and the coordinates of the point on that surface where you want to calculate the equation.

Partially differentiate the mathematical function of the surface under consideration. The detailed calculations can be seen from the examples shown in the next section.

Calculating Partial Differentials at a Point:

Calculate the value of partially differentiated function at the given points for finding tangent plane equation as shown in the upcoming examples.

Following examples clearly illustrate how the desired equation can be determined using the above-mentioned steps.

Our tangent plane calculator also follows the same procedure as used in these examples and you can get exactly same result in seconds.

Now, we will Substitute these values in the general equation:

How to Use Tangent Plane Calculator:

Efficient and speedy calculation equation for tangent plane is possible by this online calculator by following the forthcoming steps:

This calculator determines the equation of the tangent plane touching the surface (formed by given mathematical function) at the coordinate points. It also provides a step-by-step solution entailing all the relevant details differentiation.

What is the basic mathematical framework used for determining tangent plane?

Partial differentiation is basically used to determine its equation which governs the plane. This tangent plane calculator is based on the same mathematical concept and yields accurate results in seconds.

Does tangent plane lie in 2-D space or 3-D space?

Tangent lines lie in 2-D space, but tangent planes are a combination of all the tangent lines touching a surface at a particular point hence, it lies in 3-D space.

What is the difference between tangent vector and tangent plane?

Tangent vector is a single line which barely touches the surface (determined by a mathematical function) at a point whereas, tangent plane is a combination of all the tangent vectors touching the surface at a particular point.

What is the correlation between tangent plane and normal line?

A tangent plane barely touches the curve surface and runs parallel to it whereas, a normal line passes through the surface and in perpendicular to it.

Performing all these calculations manually is a very tedious process. This online tangent plane equation calculator is a handy resource which produces accurate results in no time even when dealing with 3 variable functions. The mathematical framework used in the backend calculation is exactly the same as used in the manual process.

From the educational blog of Openstax – Tangent Planes and Linear Approximations

From the online resources of Libretexts – Tangent Plane to a Surface